The Vila Galé Collection Braga Hotel is located in a building that was the headquarters of the city's hospital for half a millennium - the São Marcos Hospital - which, in turn, is set in a space that was once occupied by a Roman necropolis and later, by a medieval chapel where the relics of São Marcos rested. In this space, our aim is to evoke the main facts and protagonists that marked this historic building of the city of Braga.

Founded in 1508 by Archbishop D. Diogo de Sousa (1505-1532), the São Marcos Hospital emerged in a context of welfare reform promoted at a European level, which Portugal was aware of, aiming to create larger hospital units. In Braga, Archbishop D. Diogo de Sousa was responsible for putting this reform in motion, extinguishing the existing small welfare institutions, such as leper colonies and small confraternities, to create a larger one - the São Marcos Hospital. 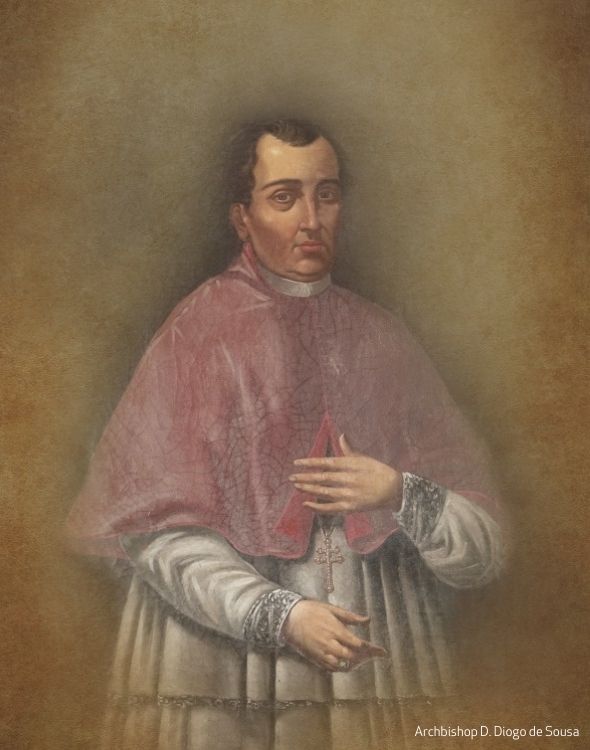 Foundation of the São Marcos Hospital by Archbishop D. Diogo de Sousa, who provided it with his own income and placed it under the local administration.

«... let it be known that this Letter of Institution and Ordination of ours that we, providing the Hospitals, Confraternities and Leper colony of this City of Ours, in the year one thousand five hundred and eight we find in it to be only a Hospital that is called the one in Rua Nova street (...) and considering how close the said Hospital is set to this city of ours, along with the S. Marcos hermitage, it is a very suitable place to welcome the poor pilgrims the pass here by... »

The cult of S. João Marcos (St. John Mark) in Braga dates back to the 12th century, when his relics were brought to the city, as evidenced by D. Gualdim Pais, Master of the Order of the Templars. Since the sixteenth century that the relics have been venerated in the Church of São Marcos Hospital, where they are gathered, in a monumental white marble tomb with inlays of various colors, to where they were transferred in 1718, on the initiative of the Archbishop D. Rodrigo de Moura Teles. The primitive urn, which came from an old demolished hermitage, is placed under this ensemble.

“The body of the glorious martyr was moved to this city of Braga, where he lies in his most ancient chapel of invocation, and the name of the same saint is in Campo dos Remedios in an ancient sepulcher of jasper, covered with a stone that holds the sacred relics. Through them, God works many miracles, & they are visited, & venerated by many people who come from various parts of the Entre-Douro-e-Minho province. The land that is taken from around the grave can be used as a remedy for various illnesses, and it is taken with strong devotion for the cure of many ill people. By the chapel, there is a hospital where poor sick people are cured: the street was named after this Saint, as it is now called São Marcos street, because it leads to the chapel where the sacred body rests.”

(D. Rodrigo da Cunha, First Part of the Ecclesiastical History of the Archbishops of Braga, and of the Saints, and illustrious men who will flourish in this Archbishopric. Braga: Manoel Cardoso, 1634, pages 107-108)

In 1718, the charity Santa Casa da Misericórdia de Braga expressed its wish to transfer the relics of S. João Marcos “to a more honorable place and a more decent tomb” to Archbishop Rodrigo de Moura Teles.

(ABDA, Book 7 of Letters to the Cabido (grouping of canons), Privileges, Honors and Jurisdictions, Letter No. 127)

“... and today we unite in perpetuity to the said confraternity of Misericórdia, so that the said provider and brothers are fully governed, under this declaration...”

“The administration And the governance of the São Marcos Hospital, that the charity is in charge of, is such a pious and Saint work, that it should be carried out with great care." 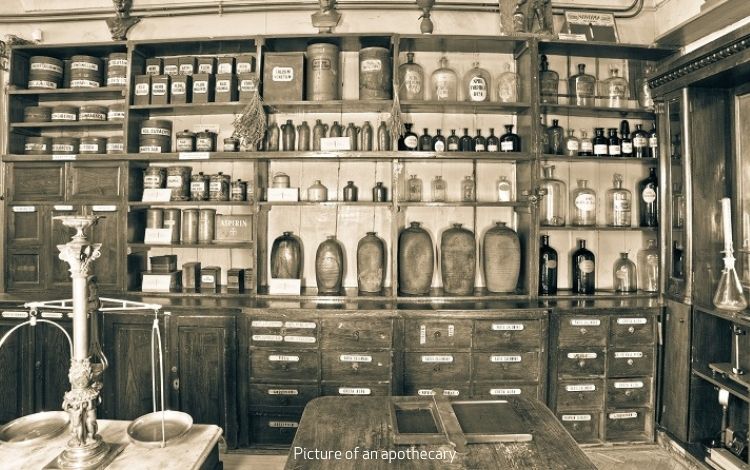 Since the seventeenth century, the hospital had an apothecary located on the ground floor that served the hospital building and its exterior.

“Recipe for the cream for treating yaws, taken from the remembrance left by Master João, the Hospital surgeon, may the Holy Glory be with him: add one arrátel (base unit of weight) of white Breu resin from India to another arrátel of mercury, half arrátel of potassium alum, and to another half arrátel of ashes done at the home of Catarina de Magalhães. Press this mixture and sieve it with four arrateis of lard or the yaws ointment and greater or less quantity may be done following the instructions hereinabove.” 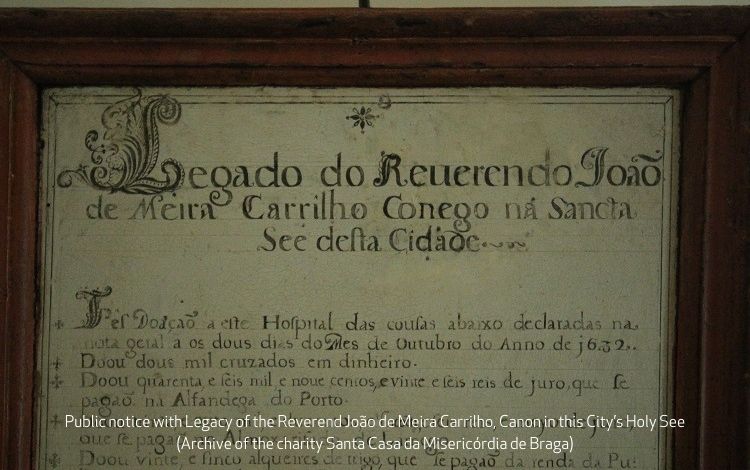 A great benefactor, rich and powerful man, he was a provider of the charity and of the São Marcos Hospital, providing the hospital unit and its church with an important legacy: a choir of six chaplains in the Hospital Church for the celebration of Masses and to spiritually support the sick.

“I hereby establish six prayer chaplains in this Church, to whom he left seventy-four thousand reis (old currency) of interest, in the Vila Real almoxarifado (fiscal administrative division) (...), so that their interests may be spent on the convalescent patients (...)”

The administration of the São Marcos Hospital’s properties was only transferred to the charity Santa Casa da Misericórdia de Braga in 1719, under provision issued on June 29th by Archbishop D. Rodrigo de Moura Teles. Local officials were therefore obliged to submit all the documentation regarding deeds, books and deadlines to the Santa Casa.

The Administrative Board of the Santa Misericórdia de Braga discussed the urgency of carrying out works in the Hospital. The Board ordered the blueprint to Manuel Pinto de Vilalobos, a military engineer, who was responsible for the cloister design.
“And that the said colonel must be given four gold coins of an additional 4800 for the work he had in paying for the said work ...”
The definitive blueprint design would include “a new frontispiece with the church in the center, which was added again”. 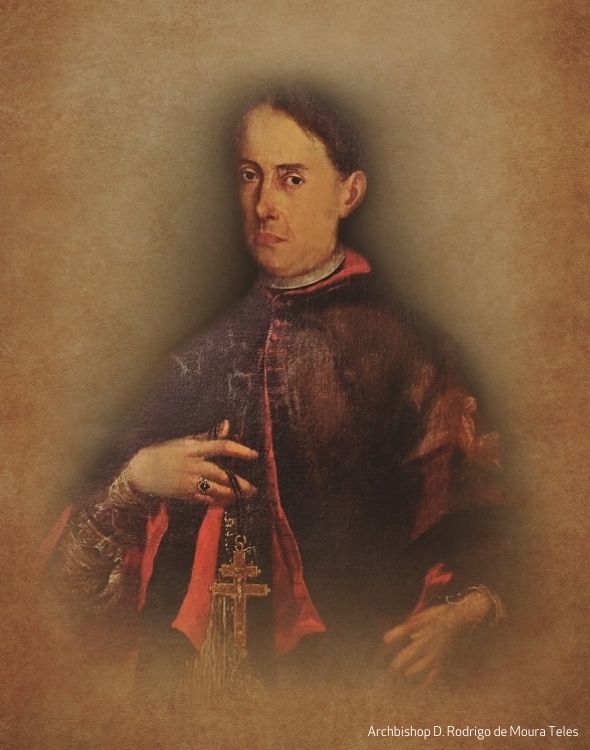 Archbishop Rodrigo de Moura Teles approves the blueprint to carry out the works in the Hospital.

“... and we command that the said work be done and continue until it is concluded in its entirety following this blueprint that is hereby signed by us (...) Braga, July 1st, 1723.”

“... using the same water that comes from the Campo de Santa Anna fountain tank to the one we had to undo and remove from the yard outside this Palace, because we built a new one, at our own cost, with fresh and more water; and the said water from the said tank is precisely directed to the said hospital.”

Legacy of the benefactor Ângela Martins.

“In 1726, Angela Martins, from Barroso, parish of da N. Sª D'Assumpção in the town of Montalegre, donated 1,000$00 (Escudos) to the Hospital and, if she had more money, she would have donated more” and “1,000 thousand reis (old currency) donated by Monte Alegre for them to sell to get food for the sick”. (Highlight of the sentence that shows in the benefactor’s portrait)

On this date, the Administrative Board of the Misericórdia decided to call a painter to portray the Hospital benefactors and display their portraits in the “hall and the new hallway, to remember the works they have done in the said Hospital and to serve as an incentive for those who may wish to do the same”.

Construction of the S. Bentinho Chapel, by André Soares, annexed to the Hospital building.

“Twelve thousand and eight hundred reis (old currency)” were spent “with André Soares for his work and this Board hopes he has amended the design in the hospital work, the same way he corrected wherever it was necessary for a greater perfection...” 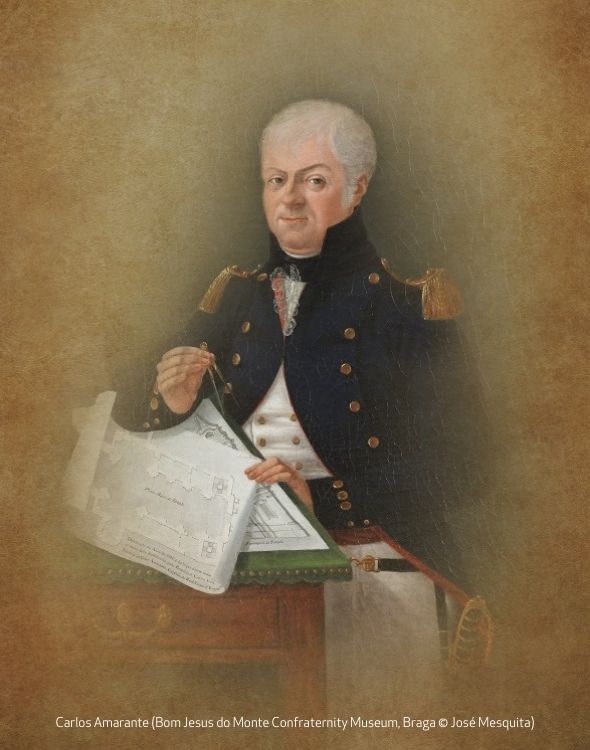 André Soares designs the small fountain in the middle of the cloister.

“We also instructed that this Hospital’s inner wall should be continued and it is to be on the back of the new church, as well as the balcony of the large cloister next to it, in the same shape as in the blueprint, and we gave some annotations in order to have comfortable access from the Kitchen to the hallway to the women's Infirmary, to prevent that the food passes everyday by the men’s infirmary; and that this work is to be done with Architect André Soares’ design on all the necessary layouts because it is very useful and convenient”.

Carlos Amarante designed the Hospital façade and the S. Marcos Church, and the works continued until 1839.

Archbishop D. Frei Caetano Brandão created the first Surgery and Anatomy Class at the São Marcos Hospital. He hired a teacher for that purpose and acquired medical books and surgical equipment for practical classes.

The Charity Sisters were admitted to the Hospital and there remained until 1911, when the Administrative Commission decided to replace them with nurses who came from Porto.

On November 1st, the charity Santa Casa da Misericórdia de Braga purchased the Raio Palace to the bank Banco do Minho, for 10 thousands of reis (old currency), for installing hospital services therein, given the clear need for more accommodation and room for new infirmaries in the São Marcos Hospital.

Foundation of the Nursing School at São Marcos Hospital.

The S. José de Cluny sisters were hired for the Hospital service, where they remained until 1976, under a boarding system, performing nursing, laundry and pantry-related functions. 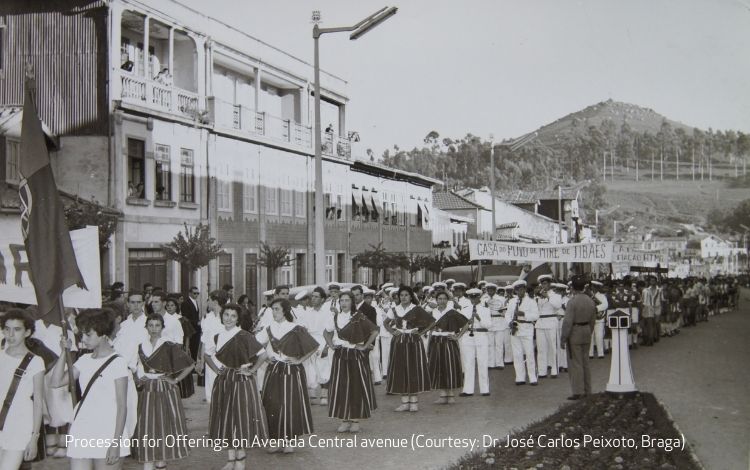 Processions for offerings and collecting public money throughout the city. Hospital support manifestations that involved the entire municipality through offerings.

Opening of a new hospital building in the South area.

During this period, Commendatory abbot António Maria Santos da Cunha, who offered several donations to the Hospital and to the Misericórdia de Braga, was particularly important and he was a charity provider between 1961 and 1968.

The São Marcos Hospital was nationalized, and its administration was transferred to the State.

The State builds and opens a new operating room.

The São Marcos Hospital closes, due to the relocation of the District Hospital to Sete Fontes.

Opening of the Vila Galé Collection Braga Hotel, in the buildings located in the northern area, in Pediatrics and in the Center for Recovery and Orthopedics (CRO).